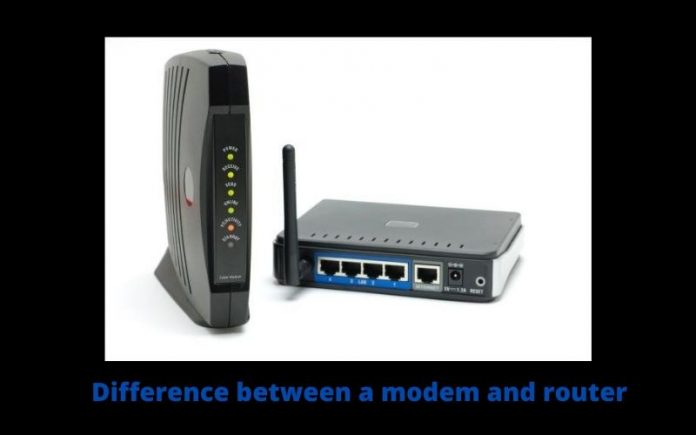 Hi guys! Router or modem? That’s the question they asked me the other day. In everyday life, okay, these words are often called the same thing – and there is no essence because for an ordinary user, it is the same thing – everything is needed to access the Internet. But there are still differences between them. So, let’s figure out the difference between a modem and a router.

There are both modems and routers. Both that and that take part in the distribution of the Internet at home. Both of them are sometimes called the same – I do not see anything reprehensible in this in everyday life. But essentially these are two different devices.

In a home network, a single modern device usually combines all the modern functionality. Modems can build routes and modulate routers. There are only some typical representatives that the classic makes you call so. I would like to talk about this below.

As said above, these are modulators-demodulators. The very thing that converts the data into the desired form and gives you the Internet output. Its task is to convert signals.

In everyday life, the word “modem” most likely came from the old DIAL-UP modems, which still worked through telephone networks. It was by conversion on the telephone line that they worked wonders that the output was the first very slow Internet.

There were both external and internal. I stood about the same as in the picture above.

But times passed, new technology came to the telephone lines – ADSL, which made it possible to increase both speeds and talk on the phone at the same time thanks to the splitter.

Some of these ADSL modems were already quite routers and understood everything, but the name was fixed on them tightly – they said so, modem and modem. But their functionality was much higher – they already connected themselves, and distributed traffic on your network, and distributed Wi-Fi. Only the connection went over the telephone line. So, with such devices, the pun was on edge.

And these are already representatives of a new era, but the names were justified. Their first task was to organize a connection to the global network via the SIM card channel and distribute it to USB to a computer or via Wi-Fi to everyone else. Those. The minimum functionality is only a connection. This is no longer a router.

These modems are still alive and actively developing. The main thing that an ordinary user should know about them is the support of the standard – 3G / 4G / 5G. The higher the number, the higher the speed. But you need to understand about coverage areas, not everywhere they manage to quickly change them. But the zones and the devices themselves are compatible with each other. Just the whole bunch will work at a speed less than the standard.

The task of the router is to distribute traffic between several devices. He usually successfully knows how to connect to the Internet – through his modem, through an external 3G modem, or simply distribute traffic from the provider’s wire.

The whole trick here – the Internet is already in the wire, and it remains only to redirect it to other devices. Initially, the routers worked in a local network of offices and did not touch anyone. And now this technology has reached every home.

Sometimes they look for the difference between a router and a router … Actually, the Router is from English and can be translated as a “router”. This is the same device only in different languages)

READ  How to connect the TV to WiFi

Please note that the main feature of any router is a lot of outputs to LAN ports. But this may not be. For example, if our router distributes traffic via Wi-Fi.

At its core, it is a convenient hub that provides wireless access to an existing network or creates a new wireless network. With multiple connections to the same point, the bandwidth is divided by the number of connected users. We can say that the access point is a stripped-down version of the router. Yes, it can work in bridge or relay mode, but most modern routers support these modes. Once again, the router is the most complex technical device of all described, which includes all the functionality of all its brothers.

What is better and differences

Yes, none of them is the best) If you are worried about technology, then here are the differences between a modem and a router:

Those. they can work in tandem within the same device.

But if you are worried about taking a 3G whistle or a full-fledged WIFI router, then look at your needs. And the usual “flash drive” can now handle quite well with a dozen connected devices. So, for the house, there is not much difference. Here it’s worth paying, probably, only to the price, appearance and power of the antennas (to get it further) – for the rest, do not pay attention, that’s all the difference between them.

How to choose the right modem

The purchase of a modem is considered one of the difficult tasks when buying equipment for a computer. When choosing a modem, several factors must be taken into account, the main one of which is the telephone line used by the future owner of such a device.

See how to set up the Internet and set a password on WiFi:

Before deciding which modem to choose, it is important to decide for what purpose it is purchased. If there is a need to connect the Internet to a laptop, you need to take into account the place where you plan to use it.

In order to access the network in a big city, you can use a WIFI router, but to provide Internet access far from the city, you will definitely need a wireless modem.

When purchasing and installing a modem, it is advisable to pre-determine the mobile service provider. It is important to take into account the coverage area, the cost of the service provided, the stability and speed of the modem itself.

Among the many manufacturers of modems due to the quality of the products provided, DLink is popular. For work in small offices and apartments, the DSL-2600U / BRU / C2 router is an ideal option, allowing you to quickly access the network and use the ADSL communication channel by several people together.

When choosing a modem for an apartment, you can stay at the DLink DIR300. Thanks to the Quick Router Setup Wizard function, which is an assistant for quick installation of the router, the network connection is completed in a few seconds. The benefits of these and many other DLink modems models are considered to be Wi-Fi Protected Setup.

The choice of a modem is based on the goals of accessing the Internet, from mobile communications, as well as from the place of stay during use. If a person does not know which modem to choose, employees of specialized stores will always help him, taking into account all the wishes of the buyer himself.

How to choose a Router?

Often it happens to spend a lot of time looking for the most convenient offer to have a fast and efficient home ADSL line, contact the various telephone operators and do the necessary calculations, forgetting, however, that to make the most of the connection you also need a good ADSL or fibre modem router.

The telephone companies often offer their devices on loan for use, but these are not always the most suitable for our needs, it is better to check their technical characteristics and decide if we should buy a modem router of ours or take the one offered by the telephone operator.

Wireless networks are classified according to the speed they can reach while browsing. This means that if we have an old modem, and its maximum speed is X, if we have a faster connection than X, such as the Fiber Optic which we pay even more, and the modem is not able to support it, we will still navigate at a lower speed.

The classes currently available are as follows:

How to make a discord server

The frequency classes of the wifi network

Since this connection is physically a wave, the wave can have a series of different wavelengths (the space between the top of one wave and the other, think of the waves of the sea).

For Wi-Fi modems, the available frequencies are two, and they are the 2.4 GHz frequency and the 5 GHz frequency. The two frequencies are not compatible with each other, so you have to pay attention to one thing: the modem, the computer, the tablets and the mobile phones must speak the same language. If I have a modem that emits 5 GHz Wi-Fi and the cellphone that receives 2.4, I will not be able to use the internet. If both of them work at 5 GHz or both of them at 2.4, I will succeed, and the connection will work.

Simple, isn’t it? Alternatively, it is as if you were trying to get the car to go with orange juice. It does not work.

The basic power range, which all devices receive, is 2.4 GHz. This band, however, has some reception problems. Because now all Wireless devices work above, and there may be interference. So if the router and device both work on this band the performance will be lower. Note that AC class routers never work on this range, but always on 5 GHz, so if you have a computer that only receives 2.4 GHz, you cannot take advantage of super-speed.

Remember. However, many devices work on both bands: in this case, they identify themselves as “Wi-Fi Dual-Band ” devices, i.e. capable of receiving at both frequencies.

For those who choose to work at 5 GHz to have higher speeds (with AC class modems). In addition to making sure that the devices they receive do it at 5 GHz. Alternatively that they are Dual Band, must consider that the older devices they only receive 2.4 GHz. Which is why if you have an old smartphone or an old tablet, you will not be able to take advantage of the maximum speed available with the line.

Finally, there are Tri-Band devices, which manage to exploit the two bands at the same time but are not yet particularly widespread.

How much does a fixed wifi router cost?

The prices of the wifi modem router vary from a few tens of euro to a hundred. Just because as you could guess by reading from the guide everything depends on the connection speed. The supported technology and also the quality of components.

I conclude the guide by providing you with the best offers for four devices belonging to different market segments and more precisely: TP-Link TD-W8960N, AVM FRITZ! Box 4020, Asus DSL-AC52U and Netgear D7000.

How to tune a ukulele with your mac

ApkMama.Com Is A Participant In The Amazon Services LLC Associates Program, An Affiliate Advertising Program Designed To Provide A Means For Sites To Earn Advertising Fees By Advertising And Linking To Amazon.Com.

Clicking On An Amazon Link From ApkMama.Com Does Not Increase The Cost Of Any Item You Purchase.

We Will Only Ever Link To Amazon Products That We Think Our Visitors May Be Interested In And Appreciate Learning More About.

Traders are allowed to hedge or bet against Stablecoin Tether’s Solvency...

mindmingles - September 21, 2020 0
By utilizing crypto subordinate items from the Opium Protocol, Digital money would now be able to ensure their tie tokens or wager against the...
APK Mama © Copyright 2020, All Rights Reserved.

how to tune a ukulele with your mac

Apple computers and laptops are not only a good work tool, but also a true multimedia center. “Poppies” in music...